We were thrilled to find that the sun had decided to wake up with us Monday morning in Orlando, FL. After a chilly Theme Park day, we were all looking forward to soaking up as many rays as we possibly could, but first: Time to FLY!

According to their website, iFLY is the experiential entertainment company that created modern indoor skydiving. They have 37 and counting facilities internationally, including one in Oakville, ON (in case you are local to Peterborough and wanted to give this a try yourself!). We arrived promptly for 9:30, filled out paperwork, were weighed and then ushered into a training classroom where we met our iFly instructor: Gator.

Now, I should pause a minute to let you readers know that from the moment we landed in Florida, our eyes have been peeled and constantly scanning in hopes of seeing some alligators. We were all made very aware of their concentrated over-population in this particular state and honestly expected to see them everywhere — kind of like the cat-sized black squirrels we see all the time at home… It was officially day 3 in Orlando and we had yet to see one. You know, other than our very chill, very human indoor skydiving instructor.

Gator played us an instructional video, then took us through the basics in preparation for our flights. Since it is impossible to communicate verbally inside of a tunnel being blasted with 120mph winds, there are three very important hand signals we all needed to learn.

The first was chin up; just as with all things involving heights, it was ill-advised to look down.   The second and third had to do with our legs, the positioning of which was very important to steadying while in flight.

And the third? Relax, of course.

Suited up and ready to iFLY!

With the basics under our belt, it was time to suit up! We each slipped into our flight suits, complete with goggles, earplugs, and helmet, then made our way to the wind tunnel.   Everyone would get two turns, each flight lasting one minute each round.

It didn’t sound like much, but we were assured that it would be plenty — especially for us novices.

Those of us who were lucky enough to be part of Team Beast (myself included) would get an additional 30 second per round. 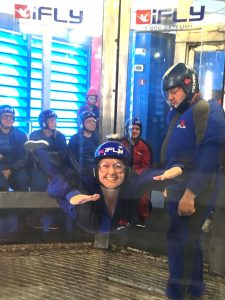 I was truly in awe of my fellow Team Beast-er Jessica who started us off — she made it look so easy! Mid-flight, Gator got underneath her and spun her around on his helmet like a propeller! Honestly, everyone looked great out there and looked like they were having a real blast.

Melanie Deighton (another BEAST) was so thrilled after her first flight that she was wiping away tears of joy in addition to an alarming amount of drool (which, to be fair, we all had to do).

We were given the chance to upgrade to a “high fly” on our second turn, which meant that guided by Gator, we would be able to catch around 12 more feet of air.

Let’s just say, I was the only one to skip the upgrade…

The rest of our day was spent as chill as possible.

Some took in the experience of a good Ol’ American Waffle House before heading back to the house for some R&R.

All dolled up for some shopping!

After some pool/hot-tub time at the house, some of us opted to hit up an outlet mall….

Others enjoyed the Lazy River at
the Champions Gate Club House…..

This was the night that “C” stood for Chef, as Spa Challenge losers Team C were tasked with cooking the rest of us dinner.

We positively stuffed ourselves on their fajita bar and toasted their outstanding meal with a round (or two) of Tequila shots. Then, thanks to their Grocery Shopping Challenge victory, “C” didn’t also have to stand for Cleaning — the rest of us took care of the tidying.

After dinner, Tye got up to make a very exciting announcement regarding the following morning’s surprise event. She was especially proud of this adventure since it was one of the excursions she spearheaded. Plus, she knew what we were all dying to see this trip…. We’d have a much better chance of spotting alligators while riding an airboat in the Everglades!

More on that later 🙂

On behalf of The Urban Spa